In 1965, Fr. Jim Clancy came to Airdrie from Carstairs to offer Mass at George McDougall School. In the following years, Fr. Connolly, Fr. Alex MacLennan, and then by Fr. F. McCarty, OMI, celebrated Mass in Airdrie at the United Church.

In 1970, Fr. John Palardy was appointed Chancellor of the Diocese of Calgary. He was also appointed the first pastor of St. Paul’s in Airdrie. Fr. Eric Nelson also served the people of Airdrie, replacing Fr. Palardy as Administrator in his absences.

The baptism of Denise Gerard on June 4th 1972, was the first to be register at St. Paul’s. Andy Mislan, who died only a few months after moving to Airdrie, and Cheryl Mirosevic who died suddenly in a car accident in Balzac, were the first deaths in the parish.

Early in 1979, the parish was attached to St. Clement’s in Calgary, with Fr. Edwin Kuefler serving the needs of the people in the Airdrie and Balzac. Due to the growing population in Airdrie and Fr. Kuefler’s poor health, he decided to resign as pastor.

On June 19th, 1979, Fr. J. W. Brown became St. Paul’s Pastor. The following Sunday, there were sixty-three parishioners present at Mass. At the time, Fr. Brown was living in Calgary at St. Luke’s Parish. However, due to the growing workload, Fr. Brown moved into the “White House” on Edmonton Trail on the land previously purchased by the Diocese of Calgary when Fr. Palardy was pastor. This house became the church and the rectory.

The women of St. Paul’s were the first to get organized. They began in 1981 as St. Paul’s Ladies Group – an organization dedicated to foster the spiritual, educational and social growth of the women of the parish, and to raising funds. The groups consisted of Catholics and non-catholic alike.

In 1982, Mass was being offered at the United Church. Later due to growing attendance, Mass was moved to Edwards Elementary School. Late in 1982, a building/finance committee was formed. This committee consisted of the following members: Nick Charney, Norm McNally, Rick Turner, Erick Martin, Bernie Knittle and Kidby, who were later joined by R. Hinger and Don Thome.

In 1983, the Diocese of Calgary acquired the land designated as 1305 Main Street, or Block 13 SR (formerly designated as a high school site). A cedar log concept for the church was decided upon. Preliminary detailed plans were worked on and approval sought from the Diocese. After mixed up meeting times and long discussions at the Pastoral Centre in Calgary, the Diocese Building Committee approved Rick Balbi’s design. On Sunday August 21st, 1983 a shovel found on the church property was painted gold and presented to Bishop Paul J.O’ Byrne at a breakfast after the Mass to be used for the groundbreaking ceremony.

On Labour Day, September 5th, 1983, the Very Reverend Father Patrick Cramer, Vicar General of the Diocese of Calgary, blessed the ground and turned the soil for the construction of St. Paul’s Catholic Church. Present on that joyous occasion were Fr. Francoise Lemire, Fr. J.W. Brown, the architect Rick Balbi, the contractor Vern Erickson, the manager of the contracting firm Ron Fujikawa, and many happy parishioners of St. Paul’s parish.

The Dedication and Blessing of the Church took place on April 27,1984 with the Most Reverend Bishop Paul J. O’ Byrne officiating.

In 1985 Fr. J.W. Brown left St. Paul’s in Airdrie and Fr. Ian McRae took his place until 1992 when he retired. Fr. Larry Chuvanquang arrived in July of that same year and remained until Fr. Frank Feldmann, S.A.C. came from Swan River, Manitoba on August 23,1993.

St. Agnes in Carstairs became a Mission of St. Paul’s from 2004 till August 1, 2014 when Fr. Thomas F. Vadassery became the Pastor at St. Agnes.

History is people’s time – the player, the dedication, the sacrifice, the love and the commitment of people living their faith makes St. Paul’s Parish history. 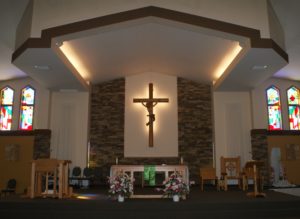